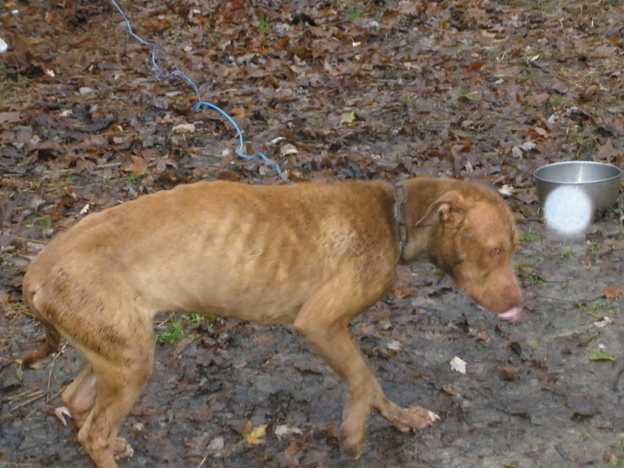 This incident took place a month ago when I and one of my friends, Aryan were returning back from our extra classes that were held during the summer break as we had an upcoming exam. We were in an area from where only a few people would pass by as it was a narrow passage and an accident-prone area. We both had crossed it halfway when we heard a bark. I thought it was my friend who was imitating a dog as he loved to imitate other animals but then I heard a soft growl so we both went in the direction of the sound to check for ourselves.

The sound came from a small dumping ground where we saw a dog covered in dirt, tied to a pole with a rope, with an injured left hind leg, bleeding and whining from the pain. On seeing us it tried to walk toward us but was too exhausted and in pain to do anything. My friend tried asking around but nobody recognized it and while he was still inquiring about its owner I gave it some water in a pot that was there and then I found out that the dog was a female. She was so thirsty that she drank it all in just a few seconds. Aryan came back with a face that said failed. He couldn’t find anything about her owner I tried to stop the bleeding with a towel in my bag. We took her to my house as it was closer to the site.

I told my mother about the situation and she agreed to help us but on one condition, I had to drop her off at an animal shelter so they could take care of her. We first washed her hind leg so that a bandage could be applied to the wound then covered her leg with a plastic bag so that the bandage stays dry while we wash her. We washed her gently with soap and then dried her with a towel. She had a beautiful brown color with white and black spots on her body. We were so busy that when we looked at the time it was already 20 minutes to 8 I rushed to Aryan’s house as he knew his parent would be upset with him for being late. I gave her some food and spread out a mat for her to sleep on. I went out in the morning to check on her and she was completely energized to bark at me with a smile.

I asked Aryan if he could meet me at my house after breakfast as we had to take her to the shelter. We took her in our car as the shelter was quite far. She constantly stared out the window. We reached the shelter and met with the shelter director to fill out some forms as they would help her recover her wound and help her find a family. We were asked to give her a name because the shelter also acted as an adoption office and it was easier for the authorities to show people around. We named her “Winnie” as she was sweet and made a person happy. My eyes got teary when we left but my brain told me to be happy as she would soon have a family who would take care of her.