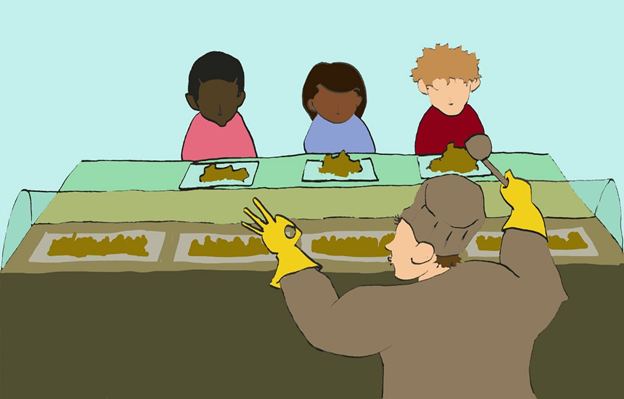 It was just a few days ago that I and my friend went to the market. Another one of my friend’s house was on our way, so we decided to meet him too, which was after a long time. We had good talks and as we walked about 150 meters, we saw a boy who we found acting a bit strange. I asked my friend about him and what he told us was a bit sad but there was something that instantaneously brought a smile to our faces. Read on to know the story, but it is this kind of great to see the work that he has been doing even with the challenges that nature sent his way. His work was really commendable and we can’t say enough.

This 24-year-old boy named Raghu has a mother in his family as his father passed away a few years back. Raghu himself is slightly mentally weak since childhood, and his treatment is going on. Though he may not be able to think like us, he is still able to think enough to understand his responsibility very well which shows his goodness. He bears the responsibility of his home, by maintaining his home as well as the shop that feeds his family.

His story doesn’t just end with this, he’s done something that one can not even imagine. The goodness in Raghu is that he feeds young children free food. There is a slum area at a distance from Raghu’s house and the people who live in the slums, have a hard time making the ends meet, sometimes there is a struggle for meals as well. So most of the children from that area go to Raghu’s shop and he feeds them free food for one time a day. Raghu loves doing this, even though he himself may have a hard time making ends meet for his family at times, but this is something that comes out of his heart. Seeing and hearing about this I had teary eyes and I was urged to write about him and his acts of kindness.

The children from the slums love him, his family loves him, and now me and hopefully the readers will also shower some blessings on Raghu who has been selflessly feeding children and helping in any which way he can, whether knowingly or unknowingly.