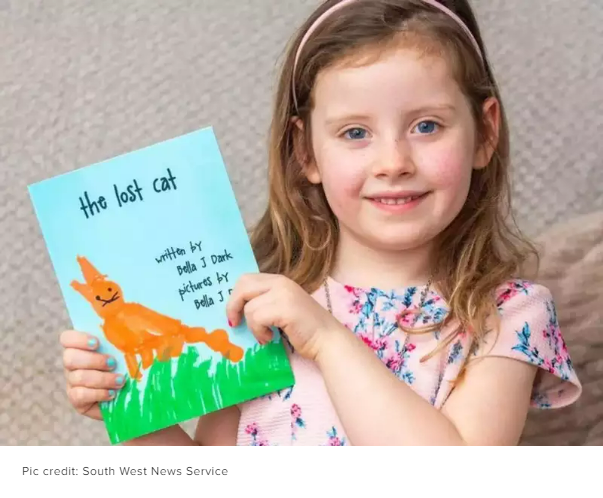 Five-year-old Bella J Dark from Weymouth (United Kingdom), stunned her family last year when she told them she was going to write a book. Fast forward to a year later, Bella has become the world’s youngest author after her first book titled ‘The Lost Cat’ has been officially published by Ginger Fyre Press.

Bella’s parents – Chelsie Syme and Myles Dark – at first thought that she was saying the regular impractical stuff that kids say. However, they were astonished when Bella’s book became a real title and got officially published.

“The lost cat written by 5-year-old Bella J Dark tells the story of Snowy, a kitten who gets lost. In doing so, Snowy learns a valuable lesson. This book delivers a powerful and positive safety message to children,” reads the book’s blurb.

“We are just so proud of Bella and honestly can’t believe how amazing this is. We’re also so grateful for the support and acknowledgment she has already received so far and she deserves this so much,” Chelsie told a London-based media house.

“She has always thrived off positivity from people – she just loves reading and drawing,” she added. Chelsie also admitted she did not have high expectations when Bella first told her she planned to pen down a book.

“I thought it would just be some scribble and you would say ‘wow’ like you do as a parent,” she said. “We then went to a book fair and someone there said they wanted to publish it.”

“Meanwhile, to claim the official Guinness World Record accolade of the youngest author, Bella needs to sell 1,000 copies of the book. She has met the other two criteria – namely, that the book is published by an official company and that she is younger than seven.

Bella has done something that people generally do at their older age. Incredibly she has shown her talent at just 5. BRAVO Bella. Your future going to be bright and magnificent and Thank you for sharing a lovely, inspiring story with the world.