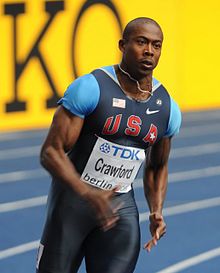 Today while browsing around, I found this article, which made me smile, showing an act of true sportsmanship and kindness, by an athlete from the 2008 Olympics. It is old news, but Happy news doesn’t go stale ever and is forever inspiring.

The article referred to here is from The Spokesman-Review and can be read in full detail here: Crawford gave medal to Martina.

In the Beijing Olympics of 2008, Shawn Crawford, the American sprinter, was originally in the fourth position in his 200 meters race and after the race, the judges found that the 2 runners ahead of him had to be disqualified for running out of their lane. Shawn was awarded second place and received his Silver medal.

He then shows his sportsmanship and does the kindest thing I feel very happy about, that he gave his Silver medal to Churandy Martina, the sprinter who finished second in the race but was later disqualified.

“I’m like, if a guy is 10 meters in front of me, I don’t care if he stayed in the middle of his lane,” Crawford told the Associated Press on Friday after finishing third in the 60 at the Millrose Games. “He was going to beat me anyway. He didn’t impede in anybody’s race.”

He also adds “Me being an athlete, I know how he feels, so I feel like it was up to me to give it to him.”

What a character he showed and he becomes a true hero for doing the right thing.

Thank you for showing what true sportsmanship means!