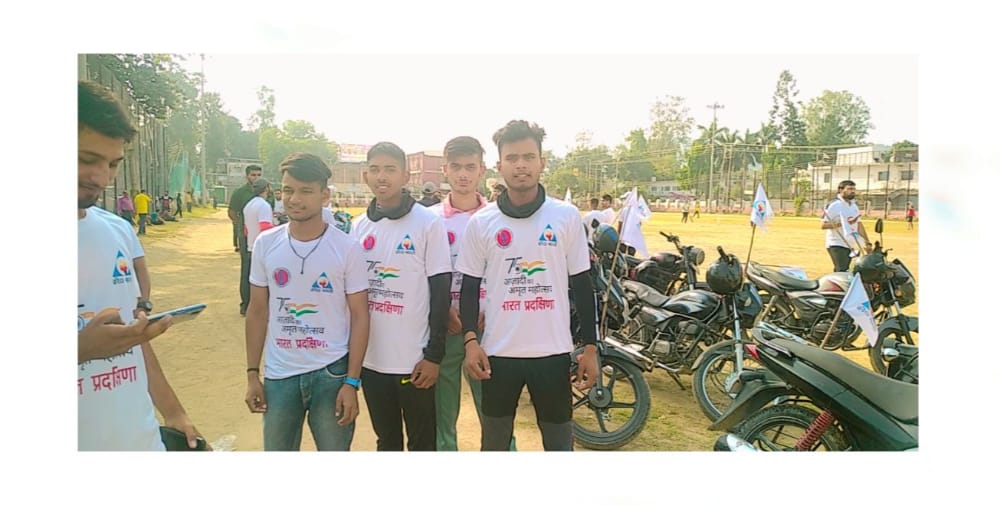 This is a little old story but a good story that will give a good message. On the completion of 75 years of independence in India, ‘The Amrit Mahotsav’ was organized across the country. Rallies were taken out simultaneously from 220 places across the country. Rallies started on 22 May 2022 in the morning with several athletes/sportsmen on motorbikes.

A local boy Ayush told me about this event where he participated in one of the rallies. The rally started from Paonta Sahib, Himachal Pradesh to Prem Nagar, Dehradun in Uttarakhand. Sportsmen covered more than 40 km distance by bikes. The primary motive of the rally was to encourage today’s youth toward sports and be away from bad habits like drug addiction. All the athletes had white colored t-shirts on with ’75 Aazadi ka Amrit Mahotsav Bharat Pradakshina’ written. The traffic minister of the state also attended the event to address the rally. Ayush told me he and his friends enjoyed this rally so much as the turnout was really good, and their rally was received well in many places. At some points during the rally, there was youth watching as well. After reaching the Prem Nagar, Dehradun they got a warm welcome from the people and students who looked very excited.

The traffic minister of the state also addressed the Rally and talked about how the youth is the future of the Country. They must not be addicted to wrong things instead participating in sports activities may give them a better future. The response of the youths was good and cheerful.

Kreeda Bharati is an Indian Sports organization which had organized these rallies in several parts of India at the same time. In my view, such events, rallies, and awareness drives have to take place so that people get reminded of their duties toward a healthy and progressing society.

Since the rally, Ayush mentioned that there have been several inquiries made by the young athletes and the event was marked as successful. Giving the right direction to the young generation is important for both themselves and the nation as it is very progressive.