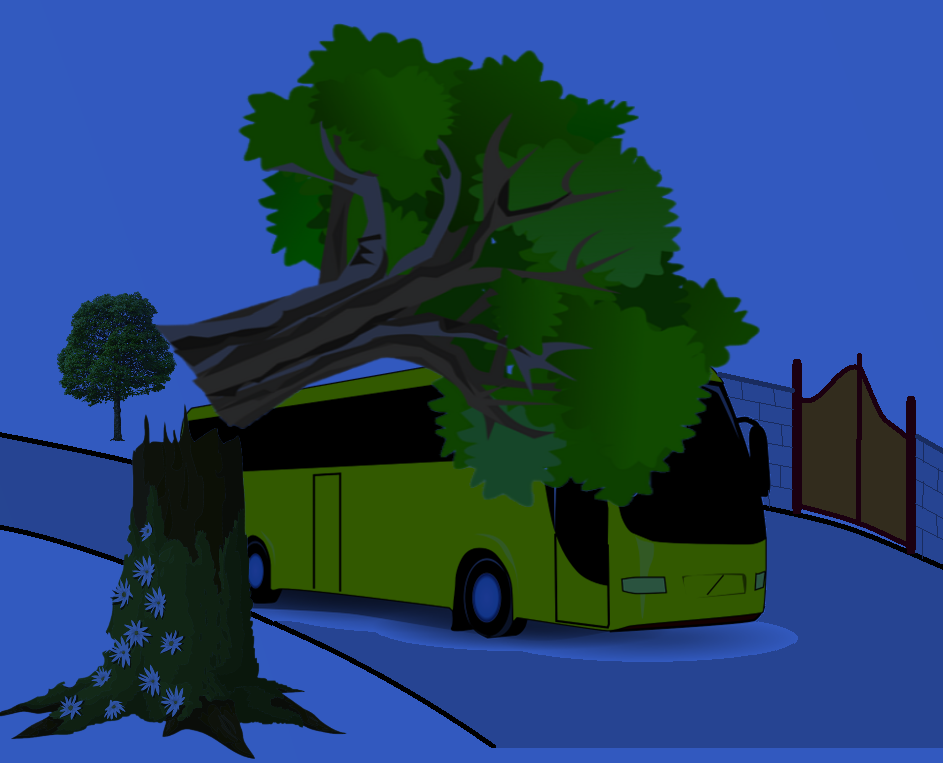 I won’t forget the night when I was traveling with my family to my grandparent’s house in Rajpur, a small town outside of Dehradun on the way to Mussoorie. This is around the years 1993-94 when I was little but old enough to still feel that night in every detail of it.

Dehradun, which is now one of the upcoming cities in India, is also the capital city of the state of Uttarakhand, which used to be very different back then. It was a small town back then loaded with greenery, not a lot of wide roads, and nestled in the valley of the Himalayan foothills. Coming back to that night I am referring to, after our dinner, my family took a bus from Dehradun to Rajpur, it was dark by this time and the weather was not very pleasant, with chances of heavy rains, heavy winds, and thunders.

We had just started the 10 kilometers journey but there were plenty of bus stops for our journey to be close to 45 mins of the ride. It had started raining with howling winds and thunderstorms. Sitting on the window seat I was pretty wet already, but truly enjoying the feeling.

About half the way into our journey, we drive into the section of the road where there were fewer street lights, a much denser population of big roadside trees, and huge bungalows of people whom you typically won’t get to see because their houses are set far back from the roads. At this time the stormy night was probably at its peak too and with extremely loud thunder our bus came to a full stop pushing all the passengers forward, and me hitting my forehead on the front seat. The journey from Dehradun to Rajpur is all uphill, so the bus wasn’t going too fast hence many people only felt some jerk but not too much hurt.

As I bring my head up, started to realize that there is a lot of screaming that has started in the bus and though it was dark, I could see that the roof of the bus was slowly coming down squeezing on some of the rows of the bus. My heart started pounding too as I was then worried that the roof will be squeezing on us too, my parents were in shock as well and were trying to get into the brace position and at the same time calm the kids down. In all the noise no one could understand anything that was said, but after a few seconds, I heard that there is a huge tree that had fallen on top of the bus because of the wind and lightning, and it also brought down electrical wires with it touching the bus.

The bus driver and the conductor somehow managed to get out of the bus while telling the passengers that they don’t want anyone to step out as the electrical wires could be anywhere so everyone was to stay seated. They went out and after a few mins, there was a police car that came closer with its sirens on. They must’ve called the electrical department who then turned OFF all the electricity in that area, and in a split second everything went even darker. With some flashlights flashing they started to bring people out from the bus carefully and made sure that no one got tangled in the wires or is closer to the fallen tree. It was still raining very hard and we were all soaking wet, feeling a little chilly with the winds, and scared with all the ruckus and thunder.

I witnessed what happened next, also the best part of the night, the bungalow right where this accident happened had its massive doors slide open, and 4-5 people with more flashlights came out with 4 tall, very tall dogs in chains. It was a scene that was no less than from a movie. Today I can tell that these dogs were Great Danes, but then they looked nothing less than scary beasts.

Though the scene was scary in general, the relief came when these men offered all the public from the bus to come inside and use their shed to stay away from the rain. We still had our luggage stuck in the bus so my father decided to stay outside to wait for it and also help the crew bring people out to safety from the bus. He probably helped at least 15-20 people as I could see him going back and forth on the bus.

The tree wasn’t forgiving as it was making sure to squeeze the bus even more as the power lines snapped, was definitely a very heavy tree. We were in the shed of this massive bungalow, and that is when the people from this bungalow brought out tea to share with the passengers and whatever fruits they had at home. The people with the dogs were the guards and they were very quick to get many people to safety.

It was more than an hour we waited in their shed until the news of the tree crashing over the bus started to spread, in India at that time cell phones were rare, and with the power lines down there was no option for landline phones to work as well. After some more waiting, I heard my father talking to a familiar voice and there he was, my uncle who heard the news and came looking for us in his car. We got into the car and even picked up 1 other family to take them to their destination. We reached our home safely and the next morning in the newspapers we could see the crushed bus.

Even today when I drive on that road, I recognize that bungalow, the tall gate hasn’t changed, still cannot see who lives there, maybe a new set of Great Danes are still there, but all of that aside, I’m forever thankful for the wonderful people who lived there that they opened their gates to help out. I’m forever thankful to the driver and the conductor for their presence of mind, not a single person was hurt badly, and many adults including my father helped out to bring the passengers to safety. Kindness and social responsibility are not a single person’s responsibility, but people who chip in a little, to make a big difference, make it a collective responsibility.