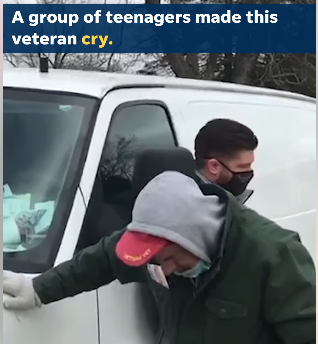 A veteran named John lived in a house that had no running water and electricity. John had lived like that for a year. He didn’t ask for help so that people don’t have to face the burden over John’s problem. But when a group of 26 teens found out, they stepped right in for John. When John was away, the group got to work.

“It broke my heart to see how the guy was living,” said Jayden Stevenson when he first saw the house. The group of the teen’s started to work, first tearing the house down. Even though they didn’t know where to start, they figured it out on the way. Once tearing it down, they built the house from the ground up. “They didn’t complain one day.” said Jeremy Penrod “They worked in the rain, they worked in the snow.”. In just 51 days, the group tore down the house and made an entirely new one. It was then time for John to see his new home.

When John came, he stepped out of his truck and saw the brand new house. Then, John started to cry happily. “I thank you for going an extra mile.” he said “I never believed this would happen.”. Everyone welcomed him home and took him inside.

Helping others can lead to big things as it did for the group of teens and John. Anyone can make a difference, and teens did that. Big or small, anyone can do anything. Thank you for your service, John!

All information from Veteran weeps over new home built by teens – Facebook. Thank you for reading, please do take the time to view the video by clicking the link!

As they say, “A True hero isn’t measured by the size of his strength, but by the strength of his heart.”. These teens are heroes too!