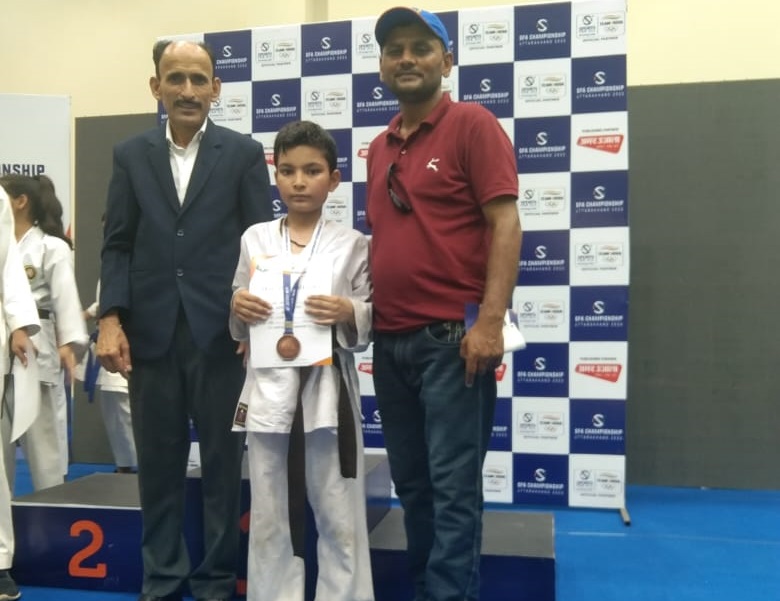 This story is about a 10-year-old student named Madhav Sharma, a class 5th student, who studies at Sapience School Herbertpur, Dehradun.

SPORTS FOR ALL (SFA) is an Official Partner of the Indian Olympic Team. It organizes sports events in the country and provides opportunities for all those school students who want to make their career in sports for all athletics activities like football, kabaddi, tennis, badminton, volleyball, handball, swimming, squash, judo, shooting, archery, hockey, taekwondo, boxing, karate, table tennis, etc. This is the first time in Dehradun, that Uttarakhand state-level championships have been organized in May 2022.

Madhav wanted to participate in this Karate competition, so his father made him join karate classes 1 year ago when he was 9. Since then he has been practicing his Karate very diligently and with his ability to learn things at this early age, Madhav gave a remarkable performance in the competitions. He won the bronze medal in the Karate Competition of the Championship which puts him as the top performer at the state level. Madhav was the youngest of all those children that took part in the competition.

Madhav is turning out to be an inspiration to all other students that want to achieve something in the field of sports. Many other children of the school have also worked hard, some have won gold or silver medals in various sports. Overall performance of the school was good as the school scored a total of 29 medals in different sports events.

The principal of the school, Ms. Rashmi Goyal congratulated and boost the morale of the children for their excellent performance. Praising the sports coaches, she said that relentless and tireless practice is the key to success.

All the participants were honoured at school for giving their best, showing tremendous passion during the event. Madhav and his family members are happy that he is giving his best and getting success at this early age.

Madhav showed everyone that if you want something and work towards getting it so much that you end up deserving that automatically, nothing is impossible. His perseverance and determination have become an example for may and he himself is super motivated to continue on this path that may, one day, lead him to become a top Karate champion. Thank you for inspiring many and us!