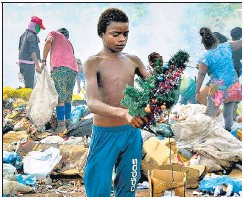 A rag picker got his life changed as his photo got viral. This is a 13-year-old Brazilian boy Gabriel Silva.
He was photographed when he was pulling out a small Christmas tree from a garbage dump. Now he has managed to buy a house for his family. Last year before Christmas, AFP Photojournalist Joao Paulo Guimaraes, captured a picture of this boy, Silva pulling a small plastic Christmas tree from a smelly heap of trash herded by vultures and impoverished trash pickers in Pinheiro, Brazil.

Photo of Silva got viral and his family started receiving donations. The donations were enough for Silva, his mother, and for his three siblings to move to a better place, a brick house.

“I’m so happy to have this house. We didn’t use to have one, we lived in a little mud hut with nothing. Now, I have a good house”, said Silva.
Silva helps his mother collect recyclable material at the dump most days after school.
The house which the family purchased several weeks ago is complete, has three bedrooms, a kitchen and a garage. “It has electricity, running water, and a bathroom with a shower,” said Silva’s mother, Maria Francisca Silva, 45. “We used to have to walk a long way to get water.”

More than 2,000 people contributed to an online collection to help the Silva’s, raising around 80,000 Brazilian Reals which is equal to 16,000 USD as of January.
The house cost 49,000 Reals, Mother said. “All that’s left to do is tile the floors and buy some furniture,” she said.

There are more than 24% of Brazil’s 213 million people live in poverty, according to the national statistics institute.

I never thought a photo could do this, it is the people and their compassion, who changed the life of Silva and his family. Silva can now focus on his study instead of thinking for his living by collecting trash.
There are a vast no. of children in the world who are trash pickers like Silva, who need the attention of people or governments for a better future.